This is a story of a small family and our dogs. Three years ago our beloved dog Cane died at the age of almost 15. Not a bad age at all for a Belgian Groenendaler, but not nearly long enough for me. For a long time I could not think of having another dog, even though I love them dearly, but at the end of last year it seemed to be time to let another dog into our lives and hearts. So the search began. Not a puppy, for sure. It must be a rescue of some sort. We thought it would be best to get a dog that was already in The Netherlands. There should be plenty, right? The only other requirements were a medium to large dog, must be good with cats, and have soft fur. Not so hard, right? Ha. After 3 months of searching we decided to look at dogs originally from outside NL. Now the selection was much bigger but… how to choose? After much searching we had a short list and made plans to visit some dogs. One of them was a Greek boy named Bruno. Could he be the one? Unlike many dogs from other countries, there was a surprising amount of information about Bruno’s life from puppyhood until his current age of about 4 years old. Here is the text we read on the website about him.

Bruno was born on a huge pile of trash.

This was the well-known landfill of Drama.

People drove their car up the mountain, dumped the trash out of it and after a few days a huge shovel moved all the dirt away into the abyss.

On this mountain you found puppies, young dogs, old dogs, sick, deathly sick or healthy. Everything ran together and diseases were easily spread. Bruno walked in between. Born amongst the garbage.

Bruno was determined and closely followed the volunteers. Not for the food, but for that well-known hug. Every day he followed the girls to the car. Sometimes he was just too tired and then they carried Bruno.

Eventually they took little Bruno with them, cared for, castrated and vaccinated him. Bruno has been in a 'shelter' for 3 years now. This shelter consists of a rickety fence, a plastic barrel under a corrugated iron roof and a tree for shade. He had to share this place with 14 other dogs. Selly met Bruno a few weeks ago and lost her heart.

He put his front legs over her shoulders and held her so tightly, it seemed as if he was giving an emergency hug. 'Take me with you!'

Since that day she goes Bruno, she visits Bruno daily and even took him with her! He walks with her on the line without any problems, plays with her, listens to his name but he prefers to sit on her lap.

I sent an email as soon as I could, but oh no! Someone else had already visited and wanted to adopt him! Sigh. But wait, for one reason or another that person could not adopt at that moment (she went on to be a foster, so win-win for all humans AND another lucky dog!). Did we want to visit him? Yes, please! I went to the foster family for the first visit. He was sweet. He was soft. He was just big enough. There was a definite “click” between us but I could not make the decision by myself so another trip was planned for my man to meet him too. Adopting a dog is not to be done in haste. Hurray! Double-click! And Bruno seemed to like us just as much. So began our lives together.

And now I get to tell Bruno’s story with us, in Apeldoorn. J

We brought him home on 13 April and it’s a busy 2 months since then. We could not love him more. He settled in really quickly to being an indoor dog, immediately taking over one of the comfortable living room chairs as “his” place. One thing we were concerned about was how he would get along with our cat, but that went better than we could have asked. He showed no interest in Cat at all, and since then has done nothing but sniff at him now and then. In fact, Cat bosses Bruno around, alternately giving him “kopjes” or swatting at him as he walks past. Poor Bruno doesn’t know what to do most times but he remains a gentleman.

He is adapting to our small house and back garden and, after only a couple of mistakes, already has learned that neither one is for doing his “business” in! We go for nice walks in the nearby park every day and after a couple of weeks he now plays in the large dog park.

He’s really gained confidence with other dogs and is learning to play with them and with people. Oh, can he ever run! The park is really big and the dogs get going and there is no stopping them. Only a few dogs are faster than our Bruno. He’s for sure got some wind hound in him! He’s also very good at being a cuddle-bug to the people who have dog snacks in their pockets. He has a wonderful “Auntie”, our neighbour, who takes him for walks and watches him sometimes if we are out for the evening. The only down point in our life with Bruno is that he has attached himself just a little TOO much to me, so it’s hard for him to accept when I have to go out for a little while. Luckily he does well in the crate (bench) but he does not like being alone. We are working to get him used to my being gone a little at a time and I’m sure it will be fine before long. He’s so easy to snuggle with that it’s hard to make him be alone.

We even attended Doggy Days in June, which was a whole weekend at a Landal park just for dogs and dog people. We had so much fun and Bruno got to meet Piet Hellemans, a veterinarian and TV presenter here in NL.

He thought Bruno was very healthy, well-socialised and exceptionally settled for only 2 months with us, so well done to Selly and the people of the Drama shelter! In spite of having so many dogs to care for, you have done well to care for their social skills as well as their physical well-being.

Bruno is a part of our small family and we will do all we can to make it a long and happy one. Thank you all again! 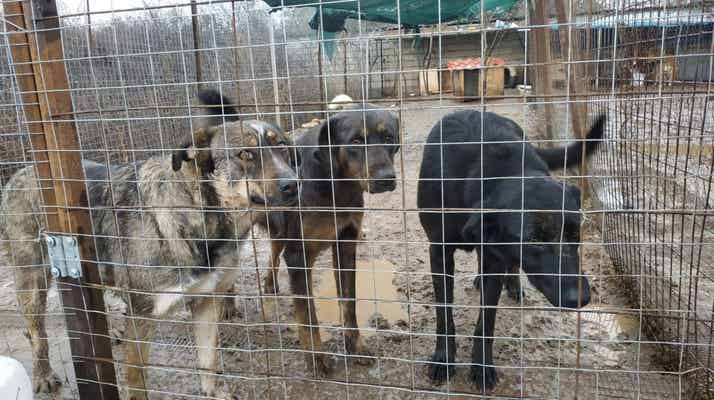 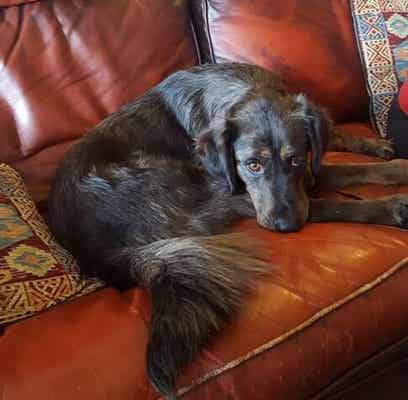 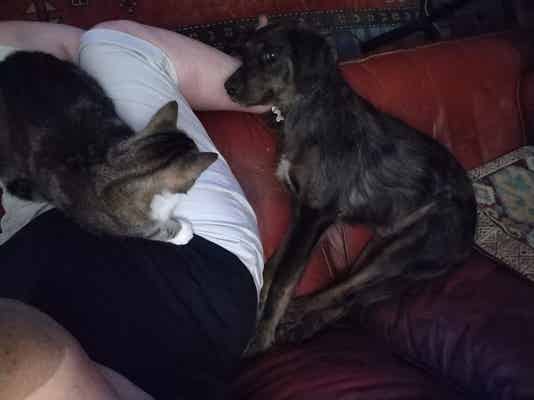 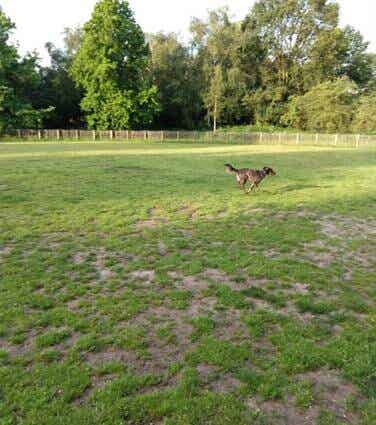 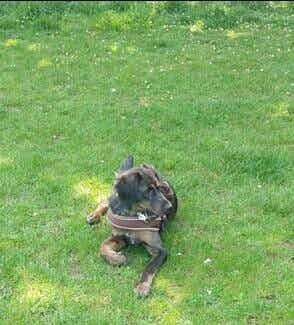 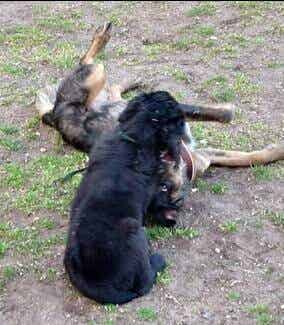 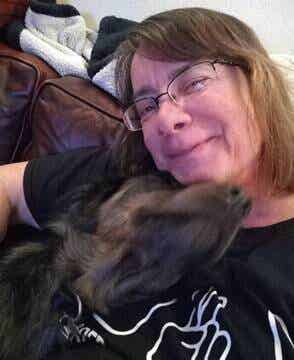 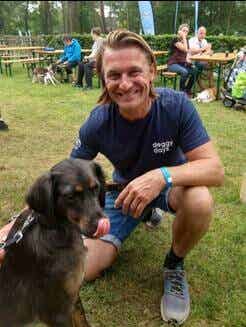 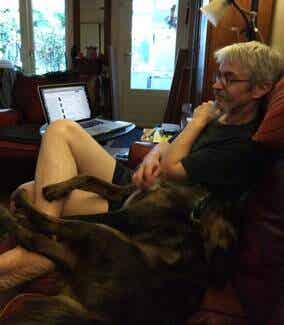 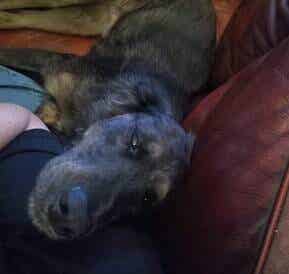 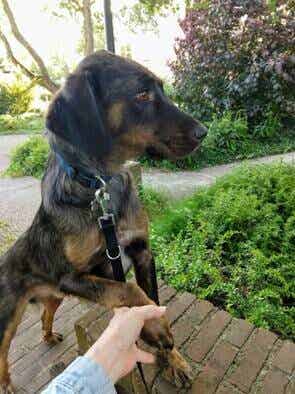 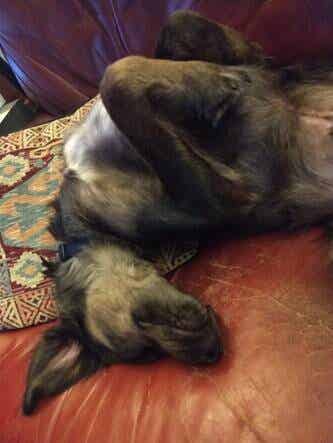 Loved the download version with the pictures!
I some how enjoy long stories about these incredible life adventures that human & dogs (among other living being of course) create as they finally become a family (a roedel, a new constellation!)....

So thank you for sharing your journey, it is a deeply moving one, and Bruno is so beautiful, I wish you love and health together!